Sunglasses can be historical and modern at the same time. A brand that fits those two categories is American Optical or AO.ퟀ Their eyewear has been an American staple since the 1870s. After all, this brand has a deep connection to American history. American Optical is aퟀ pillar of the American eyewear industry. The company started as early as 1826. It created and still creates eyewear that is useful for customers. Today, AO continues the legacy of manufacturing first class eyewear. 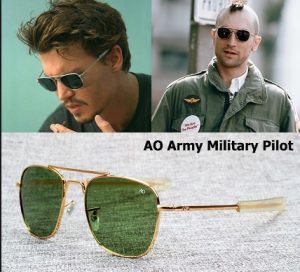 In the early 19th century the optical and eyewear industry in the United States really began.ퟀ Europe was the top exporter of optical frames and lenses. If a person didn't buy from Europe then they had theirퟀ frames made by local jewelry makers andퟀ other specialty metal workers. This createdퟀ created a limited amountퟀ of eyewear frames which were all unique. In 1826, William Beecher, a farm boy from Connecticut, started to learn theퟀ jeweler trade. Beecher had already been an apprentice. His years of practice enabled him to master making exceptional frames. In 1833 Beacher saw a pair of crudely crafted European sunglasses. He knew he could do better than that and foundedퟀ the now famous American Optical Company. In the 1900ퟀ s the company grew at a very fast rate. During this time, AO was already employing more than 2000 workers. As theퟀ company grew to this point it was already producing overퟀ 20 times more glasses than at its start.Also Read:ퟀ OGI Eyewear ퟀ Creative Eyeglasses

Changes During The War

AO developed 6 special mobile optical units to support the United States troops during World War I. These unit facilities include frames, lenses, machines, and refractive equipment which aims to help soldiers get fitting and filling for the prescription lenses. Two white metal frames were released at this time, aptly called Victory and Liberty. Later during World War II, AO again ensured that they participated in the cause and developed new products that are useful for the US troops. Some of the products proved extremely useful in the field, for example, the gun sights, AR glasses, bombsights, aviation goggles, and precision optics. The Army-Navy E award was given to AO's entire workforce in 1946. This award recognized their efforts and dedication during the war.

In 1958, AO developed the Flight Goggle 58, which is now known as the Originalퟀ Pilotퟀ Sunglass. This modelퟀ wasퟀ createdퟀ to provide military pilots optimum protection against the sun. In 1969, AO was honored when the Original Pilot Sunglass was the choice of eyewear by Neil Armstrong. This made the Original Pilot the first ever sunglass to be used on the moon. This eyewear now resides in a permanent display in the Smithsonian Air and Space Museum. Today, AO pilot sunglasses come in numerous shapes and sizes. Unlike a typical Aviator which has the teardrop shape design, the pilot sunglasses from AO have flatter frames and lenses on the bottom. This gives the AO sunglasses a more masculine effect.